Problem/Opportunity: On the heels of the Pepperdine University 75th Anniversary awareness campaign, the Integrated Marketing Communications team saw the opportunity to introduce a new advertising campaign that elevates the hallmarks of the Pepperdine brand in the marketplace.

Pepperdine has developed an advertising and visibility plan that builds upon the momentum and "conversation" established during the 75th Anniversary Campaign by introducing the Stand Up, Step Forward, Take Flight campaign. The new campaign consists of one mission ad and a three-ad series exploring the institutional hallmarks of purpose, service, and leadership.

Stand Up: The first ad in the series relates to Pepperdine's key value of purpose. It reads: "Stand Up and Find Your Purpose". The photograph shows a young woman standing in the loft of Pepperdine's Stauffer Chapel, gazing reflectively at the building's beautiful stained glass windows. The camera, positioned behind her right shoulder, captures both the woman as subject as well as her view and perspective in the chapel.

Step Forward: The second ad in the series highlights Pepperdine's key value of service. It reads: "Step Forward and Serve Others". The photograph shows the lower bodies of two individuals getting involved and serving their community by cleaning a local school playground.

Take Flight: The third ad in the series emphasizes Pepperdine's key value of leadership. It reads: "Take Flight and Become a Leader". The photograph shows a student standing in a Pepperdine classroom, addressing his professor and peers on the topic at hand. Like Stand Up, the camera is positioned behind the student's right shoulder.

The images in the series intentionally draw the viewers focus to the context of the situation depicted. The intent was to allow the viewer to envision themselves in the setting and encourage the viewer to take action. The actions described are those commonly taken by members of the Pepperdine community.

Each ad contains a targeted campaign URL that directs viewer to a unique landing page for each of the brand hallmarks. The related web pages feature stories about the key value along with a listing of available resources that demonstrate how these hallmarks are lived out at Pepperdine and how interested parties may get involved. The landing pages also provide a quick view of current news, events, and links to the university's five school.

Advertising Plan: Two flights of the campaign geographically targeted areas in California where Pepperdine has maintained strong recruitment and active alumni engagement. The first flight ran from October to November 2012. The second flight is scheduled to run in March and April 2013. In addition, the Stand Up, Step Forward, and Take Flight advertising expanded prior advertising campaigns to include national placements in Christian and academic outlets. We estimate the reach of this campaign to exceed roughly 9.25 million impressions. 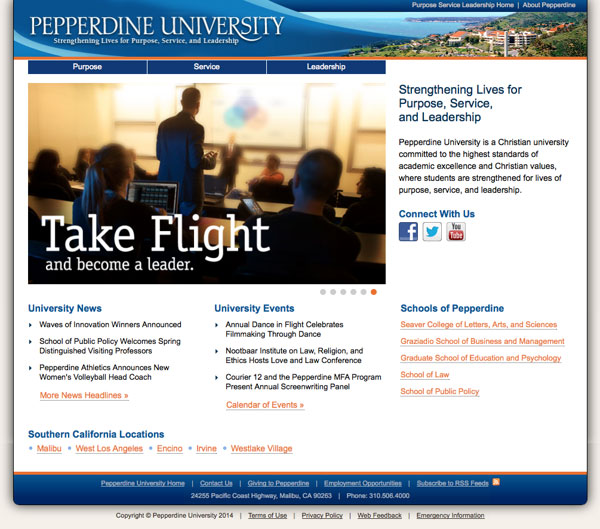 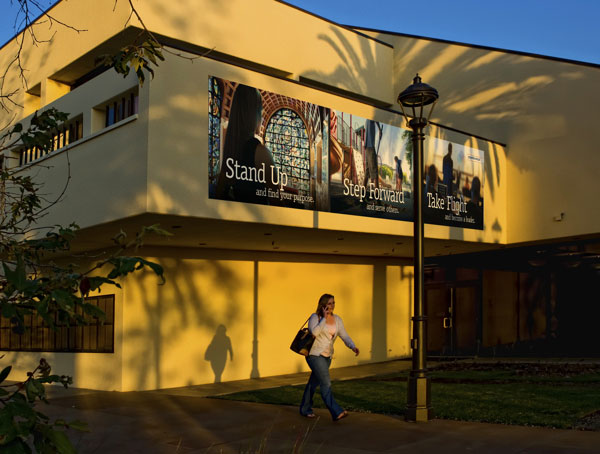 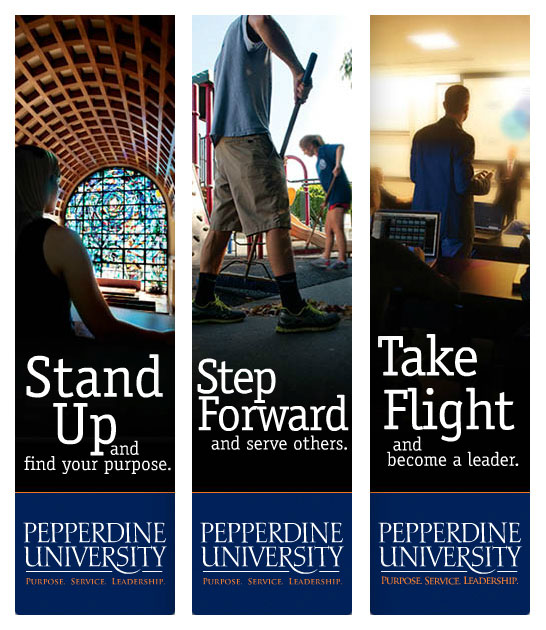