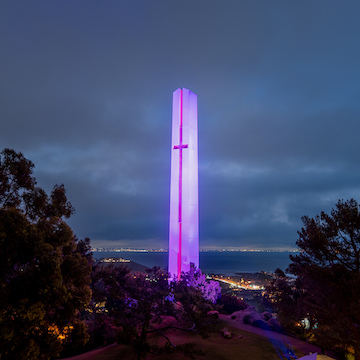 Join the Pepperdine community tonight, November 11, at sunset, to witness as the Phillips Theme Tower is illuminated in purple in commemoration of Veterans Day and the 240th anniversary of our nation’s Purple Heart award.

In an initiative led by the National Flag Foundation and the Military Order of the Purple Heart, Pepperdine University was identified as the sole California representative of Light to Unite, a nationwide effort to demonstrate support for our country’s military heroes. Across the United States, Light to Unite has planned displays at buildings such as One World Trade Center in New York City, the Willis Tower in Chicago, and the Koppers Building in Pittsburgh.

Attend the lighting in person as Pepperdine’s 125-foot landmark is lit up for one of the few times in its history.