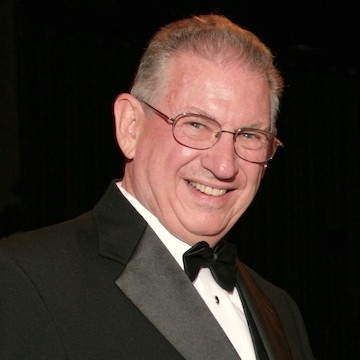 Hornbaker was hired by Pepperdine in 1969 as the vice president for development with the goal of raising the funds to expand Pepperdine’s footprint from the original Los Angeles campus to Malibu after the college received a donation of 138 acres of undeveloped ranch land in Malibu by members of the Adamson and Rindge families. In just over two years, Hornbaker and the development team raised $24.6 million for the campus’ construction and eventual opening in Malibu in 1972.

“In 2022 Pepperdine celebrated the 50th anniversary of the move from the original Los Angeles campus to Malibu,” says Pepperdine president Jim Gash (JD ’93). “Fundamental to that move was Larry Hornbaker, who gathered the friends and funds to ensure the realization of our future campus home. While we are saddened by his passing, we are fortunate to recognize and honor his contributions to the University and the legacy he has left behind for future generations of Waves.”

Throughout Hornbaker’s 33-year tenure at Pepperdine, he served in various capacities that played a critical role in the University’s advancement, including vice president for administration, acting vice president for finance, senior vice president, executive vice chancellor, and vice chancellor. Beyond his extraordinary fundraising efforts, he was instrumental in the leadership of signature construction projects on the Malibu campus, including the Drescher Graduate Campus, Smothers Theatre, Lindhurst Theatre, faculty and staff housing, Lovernich and George Page Apartments, the Pendleton Computer Science Center, and Field Heritage Hall.

“As executive vice chancellor and the University's chief development officer during the critical years of building the Malibu campus, Larry Hornbaker was a fearless leader,” says Sara Jackson (’74), Pepperdine University chancellor. “He assembled a capable advancement team and worked tirelessly to see that the Pepperdine Malibu dream became a reality. Few know the personal sacrifices he and his wife, Carol, made during those critical years, but in spite of it all, Larry was led by optimism and joy.”

Though he retired in 2002, Hornbaker continued to support Pepperdine through various functions, most notably as the lead consultant for the University’s historic Campaign for Pepperdine: Changing Lives, which raised more than $470 million.

Hornbaker is survived by his wife, Carol; their children, Deborah, Douglas, David, and Darin (BSM ’99); six grandchildren; and two great-grandchildren.

Memorial service details are pending and will be shared with the community as more information is available.