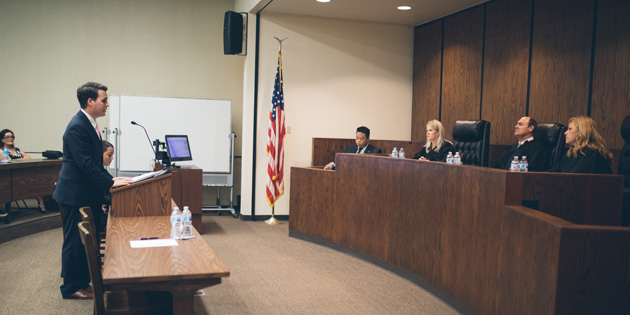 The Pepperdine Moot Court Board is a student-run board overseen by a faculty member which is responsible for hosting the Caruso School of Law (CSOL)’s three annual intra-school Moot Court Competitions where our own upper-division students showcase their advocacy skills against their fellow classmates, as well as one inter-school competition hosted at CSOL on a bi-annual basis. In past years, the final-round benches for these competitions have included United States Supreme Court justices Sandra Day O’Connor, Byron White, Clarence Thomas, Ruth Bader Ginsberg, and Chief Justice John Roberts.

The Armand Arabian Advocacy Competition is the first of the MCB’s in-house competitions, and is held annually at the start of the Fall semester. The competition consists of individual second- and third-year students, rather than teams of students, arguing a problem written by one of the Moot Court Board’s student Problem Writers.

Previously known as the Individual Advocacy Tournament, this competition was renamed in 1999 for the Honorable Armand Arabian, who served on the Supreme Court of California from 1990 until his retirement in 1996. Justice Arabian Served in the Los Angeles Superior Courts from 1972-1983. In November 1983, he was appointed to the California Court of Appeal, Second Appellate District, Division 3 by Governor George Deukmejian. He served as a private judge until his passing in 2018.

This annual competition is held in the Spring semester, and is open to all second- and third-year CSOL students. Teams of two students compete against each other over a problem written by another MCB student Problem Writer. This competition is named for the Honorable Vincent S. Dalsimer, who served as Dean and Associate Dean of the law school. Judge Dalsimer served in the Los Angeles Superior Courts for over two decades. In 1981, Judge Dalsimer was elevated to the California Court of Appeal by then-Governor Jerry Brown. Judge Dalsimer passed away in 1999.

This competition is the last annual competition held each year by the Moot Court Board. All 1L students are required to participate in the competition as part of their Legal Research and Writing courses. This competition is named after Col. John Moriarity and his wife Maria. During his time at UCLA Law School, Col. Moriarity won both the first- and second-year Moot Court competitions, and also advanced to the final four in UCLA Law’s third-year Moot Court competition, where he argued before California Chief Justice Roger Traynor. Col. Moriarity has tried over 200 jury verdict cases before the California, Hawaii, and Nevada Supreme Courts, and has served as a member of the Judge Advocate General’s Corps. Col. Moriarity currently resides in the San Fernando Valley and practices as a civil trial attorney.

Since the turn of the millenia, the Moot Court Board has hosted the National Entertainment Law Moot Court Competition. The decision was made in 2021 to move the competition to a bi-annual basis to make room for other Entertainment Law opportunities at CSOL. This competition is historically held in November, after the Armand Arabian Advocacy Tournament. CSOL plays host to law schools from around the country on our beautiful Malibu campus. The competition’s problem is written by a student Problem Writer, and always revolves around some topic relevant to Entertainment Law. During competition years, you can find information leading up to the competition on the NELC webpage linked above.