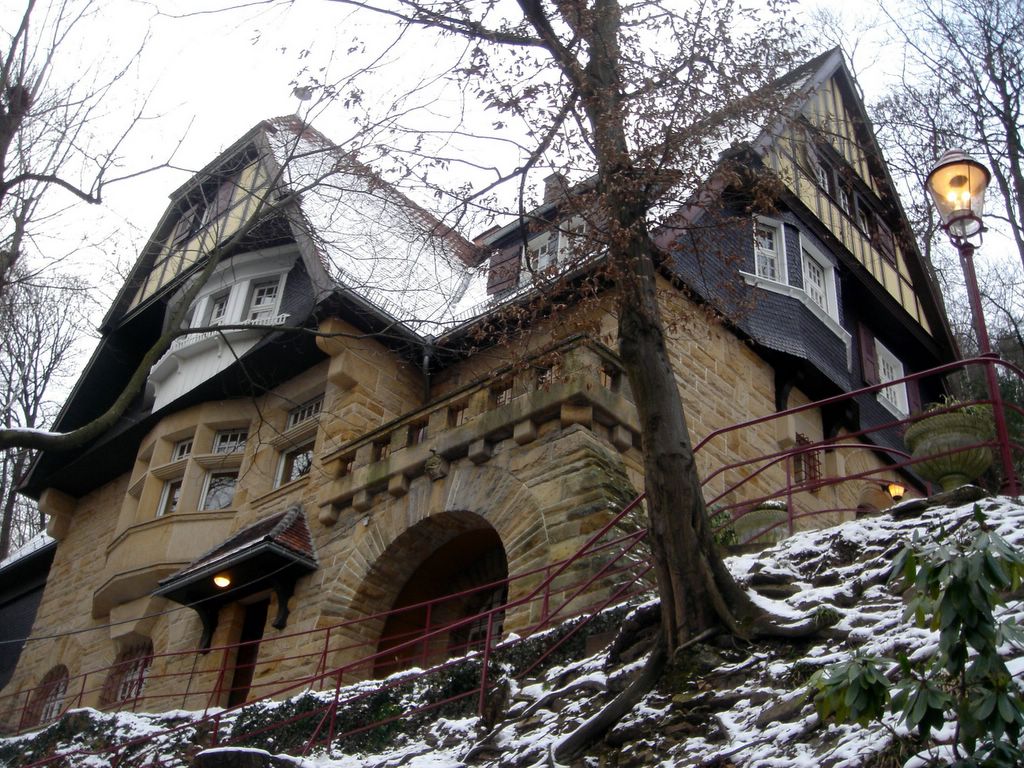 In 1963 Pepperdine University began its "Year-In-Europe" program in Heidelberg, West Germany. From 1963 through 1965 students and visiting faculty resided in various hotels and guest houses in the city.

After considering several properties in 1965, the University purchased a permanent facility located 300 yards from the entrance of the Heidelberg Castle. The spacious and beautiful villa had been built by Prof. Dr. Endenmann in 1906.

The property belonged to a series of villas on the castle hill in Heidelberg which made architectural history because of their eclectic German Country Villa style. The trilingual (German, French, English) publication Architecture of the 20th Century (7/1907) described the house as "distinguished by its picturesque appearance."

After World War I the house was sold to the Schmitthelm family who made their fortune by manufacturing down comforters. During World War II the spacious family mansion was filled with families from Mannheim whose homes had been bombed. At the end of the war, the US occupational army confiscated the house and used it as the headquarters for the CIC, the forerunner of the CIA. For several years it was used to interrogate former Nazis and to monitor communist activities. In 1953 West Germany received limited sovereignty from the Allies and the house was returned to the Schmitthelm family. The family, having moved to a more modern home, rented out the spacious villa to the newly established Federal German army, which used it for its regional headquarters offices.

In 1965 the house was offered for sale. Pepperdine University was able to purchase the house for $ 100,000, the price it had cost to erect it in 1906. Extensive renovation converted the house into a dormitory building. Great care was taken to preserve the character of the house with its turn-of-the-century touch.

In April of 1966 the first students moved into Pepperdine's own facility named after the late J.C. Moore, Jr., Pepperdine controller and spiritual father of the Heidelberg program. The house provided space for 36 students and a faculty family as well as the program office, library, a student center/breakfast room and a spacious reception room. The house consists of four stories: a lower ground floor and three additional floors. The domestic offices were located in the lower ground floor, while the main floor was designed to receive and host guests. It now contains the apartment for the visiting faculty, the library, computer lab and the reception room. The second floor housed the living quarters of the family, and the top floor, with a breathtaking view over Old Heidelberg and the Neckar Valley, was reserved for the servants. These floors are now used to house students.

The success of the Heidelberg program made the house too small for Pepperdine's purposes. At times 20 additional students were housed in three different locations throughout the city. Under the presidency of Dr. Howard White the decision was made to add two wings to Moore Haus. The construction, in solid masonry and concrete, took only three months; soon afterwards the house was declared a historic monument which would have precluded making any alterations to the structure. The two new wings were cleverly integrated into the existing architecture and blend into the house so harmoniously that old and new sections have to be pointed out to be noticed.

Moore Haus has, as one visitor put it, an "old world charm coupled with a very collegiate feeling". Since Pepperdine purchased the house up until the year 2016, approximately 3,500 students have been able to call it their "home away from home"; many students describe their time of study in Heidelberg as their most valuable and memorable educational experience. Because of its hilltop location, Moore Haus stands commandingly as the highest house on the Castle hill and is prominently visible from the famous Philosopher's Way and the Old Town of Heidelberg. Virtually every visitor to the Heidelberg Castle, whether by bus or on foot, passes by Moore Haus. Thus, not only is Pepperdine's first European Property situated in one of the most romantic and fabled cities in the world, but it also stands as one of the town's most prominent landmarks. The property has proved to be both a good investment and a wonderful place for American students to study and live during their 20th century version of the Grand Tour of Europe.

In 2016 the Heidelberg Program was able to celebrate both the 110th birthday of Moore Haus (built in 1906) and the 50th anniversary of Moore Haus serving as a "home away from home" for countless Pepperdine students since 1965/66. The Heidelberg Program is very grateful for all of the generous donations that allowed a complete renovation of the building, turning Moore Haus into a gem that countless Pepperdine students will continue to enjoy in years to come. President Benton officially cut the ribbon at the 2016 Moore Haus Dedication Ceremony which took place on June 3, 2016, in the presence of students, alumni, faculty, friends, and many of the donors involved in this great project.

Most students stay in the classrooms all day until dinner and don't return to Moore Haus until after dinner (depending on their class schedule of course). Dinners are provided in various restaurants in town. While it is possible to take a taxi ($8-12) most walk back and forth from Moore Haus to classes and meals. After walking up the hill to Moore Haus there are steps from the gate on street level to get to the front door of Moore Haus (similar to climbing the CCB steps).

1920's After World War I, this villa was home to the Schmitthelm family.

1940's During World War II, the house was inhabited by families from nearby Mannheim who
were bombed out by the war.

1950's After World War II, the house became the property of the United States Army.
It was used by the CIC (a precursor to the CIA) for interrogations of suspect Nazis and
to monitor Communist party activities.

1963 Heidelberg, Germany was established as the first international Year-In-Europe program
site of Pepperdine. Students participating in the first two years of the program lived in
hotels and guesthouses in the Altstadt (Old Town) of Heidelberg. They attended classes
first at the Amerika Haus and later at the Hotel Europäischer Hof.

1965 Pepperdine purchased a permanent site for the program under the leadership of
J.C. Moore Jr. and Norvel Young, who was Pepperdine President (1957-1971)
at the time.

1966 In the fall, the site was named Moore Haus after J.C. Moore Jr., and the program moved
into its present day location.

1972-73 Sharyn Moore served as Program Assistant to Glenn Boyd in his final year.

1980 The Tower Annex was added to the house, allowing room for 6 additional students.

1988 Classes were held from now on in their present day location in the building on
Hauptstraße 92 (third floor).

2001 In September, Freunde von Heidelberg was established to provide services to alumni,
organize reunions in Germany and to provide historic restoration to Moore Haus.

2006 In the spring, additional classrooms and a faculty office became available on the
second floor of Hauptstraße 92.

2006 In May, the 100 Year Anniversary Celebration at Moore Haus took place inviting past
residents, faculty and friends back for the festivities.

2011 Sadly, Mary Drehsel passed away in February after a long battle with cancer.

2016 Moore Haus Dedication Ceremony with President Benton, Dean Hall, donors, alumni,
faculty, students and friends to celebrate both the 110th birthday of Moore Haus
(built in 1906) and the 50th anniversary of Moore Haus serving as a "home away from
home" for countless Pepperdine students since 1965/66. The Heidelberg Program is
very grateful for all of the generous donations that allowed a complete renovation of the
building, turning Moore Haus into a gem that countless Pepperdine students will continue
to enjoy in years to come.