The Pepperdine wordmark is the foundational element of the University's visual identity and serves as the primary logo for use in all University marketing materials. The wordmark should always appear on each official Pepperdine communication vehicle, regardless of medium.

The wordmark functions as a corporate sign-off or stamp of approval for the communication. It should not be treated as a title nor be incorporated into text. The size and location of the wordmark should be discrete and should be positioned as a first or last read. In every case, the wordmark should be afforded adequate clear space around it to allow for ease of visibility.

The obligation to create and maintain all enterprise-wide brand visuals rests with Integrated Marketing Communications. No other person or department acting as an official representative of the University is allowed to create or develop a unique brand mark for their own purpose. This is especially important for any communication or marketing materials that reach an audience outside the local campus environment, since an overabundance of unique identities dilutes the strength of the brand identity of the University as an enterprise.

The full color mark works best when placed on white or light backgrounds. When placed on a dark background, the letters are set in white only. The rules retain the Pantone 166 orange. It is highly recommended that the background color be Pantone 281 blue.

In any space or usage the wordmark should always attempt to reflect the University blue and orange colors.

Please contact Keith Lungwitz at 1440 with any questions regarding wordmark usage.

The formal mark contains the word "university" and is used in two types of spaces: 1) non-contextual spaces where the Pepperdine brand is not known or recognized and, 2) spaces that would benefit from a greater appeal to prominence or gravitas. This mark is only used as a stand-alone mark and is never locked with any other element.

The friendly mark does not contain the word "university" is used in two types of spaces: 1) spaces where the Pepperdine brand is known or recognized and, 2) in combination with school names, or divisions and offices that are not within a school. When combined with a secondary element such as a school, the underscore is removed.

In order for the wordmark to retain visual clarity in whatever space it exists, it must maintain a minimum distance from other content in the same space. This minimum distance is known as clear space and represents the margin surrounding the wordmark within which type and or other graphics may not interfere. The letter "N" in Pepperdine is the standard for determining the correct clear space above, below, and to the side of the wordmark.

The Pepperdine wordmark should never be placed over a busy photographic or decorative background where its legibility is impeded. Placement of the wordmark over photos with solid color areas are generally safe as long as the proper contrast is maintained.

Proximity to other unique marks or logos

The wordmark is first and foremost a mark which informs the reader that the communication vehicle is officially sanctioned by Pepperdine University. It is the stamp of approval from the University. Therefore, the wordmark should be a first or last read on any communication piece. Its size should be modest and discrete. It should never be the dominant element on the page.

The wordmark should never be used as the title of any communication piece, a part of the title, or used in paragraph text. It should always stand apart from the rest of the content (see Clear Space above). When used in a multi-page or multi-panel piece, it only needs to appear once on the front, once on the back, or both.

Examples of the proper use of the mark in a communication. 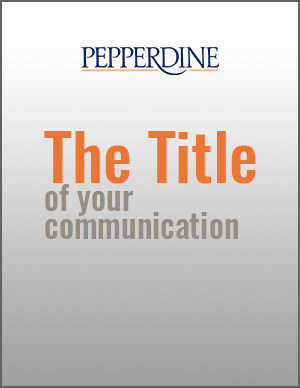 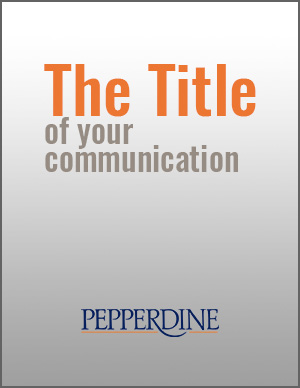 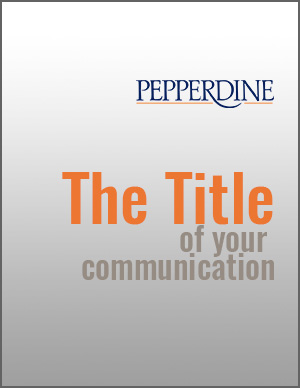 Examples of the improper use of the mark in a communication. 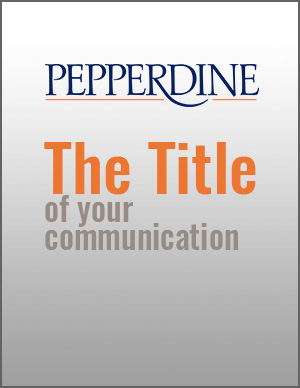 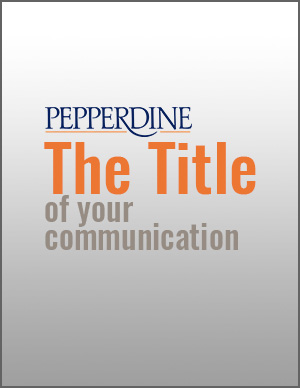 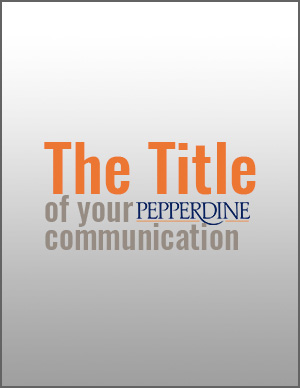 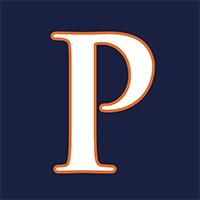